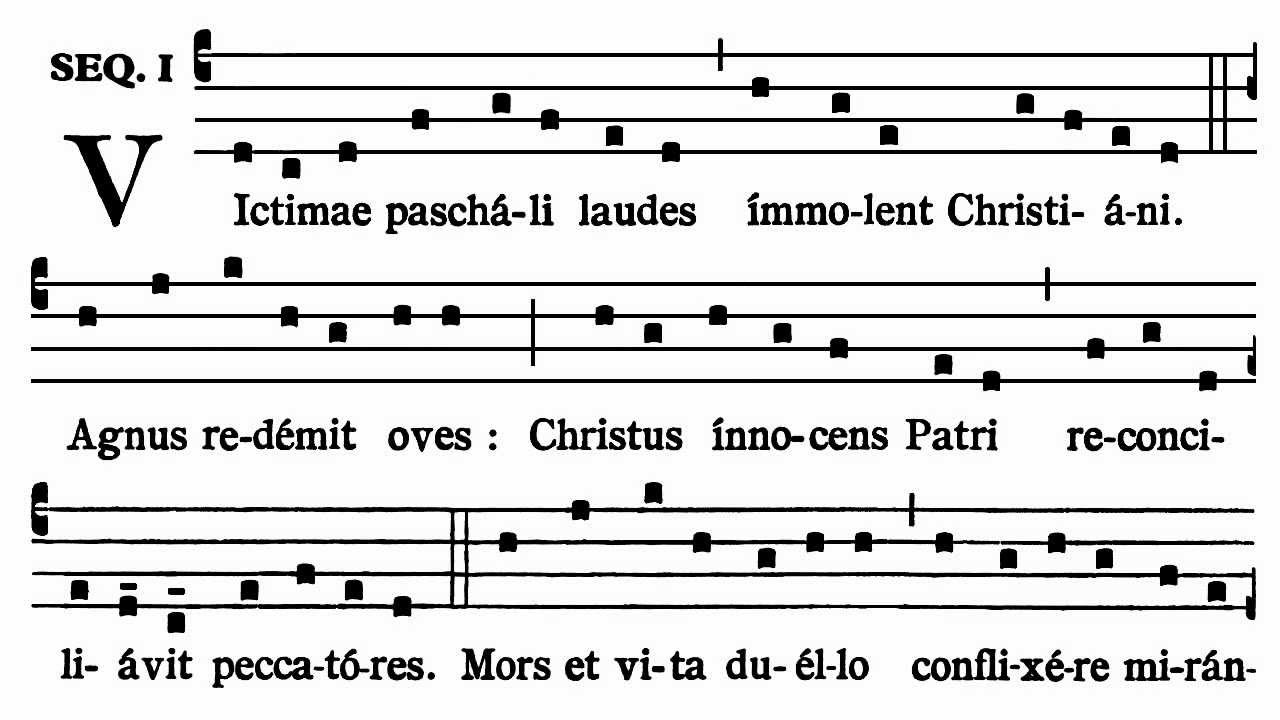 “Christians praise the paschal Victim! Offer thankful sacrifice!” This is the translation of the first line of the Easter sequence which we sing today. The sequence—something we only encounter a few times during the liturgical year—is a poetic hymn on the Mass of the day, usually providing a commentary or theological explanation on the Gospel or feast. The origins of sequences are difficult to trace, but many scholars believe they started somewhere in the ninth century when Roman chant was flourishing. Sequences were an outgrowth of the jubilus (pronounced “YOO-be

-loos”) at the end of Gregorian Alleluias. Jubili are ornate melismatic extensions of the last syllable of the alleluia. An example is to the right. The cantor or choir would continue singing “-ia” breathing where necessary to complete the phrase. The sequence then followed. As Roman chant was designed to be a meditation on Scripture, the sequences functioned as a meditative extension of the Alleluia verse prior to the Gospel. A clear indication of this is the Alleluia verse for today: “Christ, our paschal lamb, has been sacrificed; let us then feast with joy in the Lord.” The sequence then develops this verse further as can be seen by the first two lines:

“Christians praise the paschal Victim! Offer thankful sacrifice! Christ the Lamb has saved the sheep, Christ the just one paid the price, reconciling sinners to the Father.” By the 16th century, sequences were in abundance—there was one for nearly every Sunday and feast day outside of penitential seasons! In 1570, the number was reduced to four. Post-Vatican II, the sequence now precedes the Alleluia to create a stronger connection between the Alleluia verse and the Gospel. This placement also transforms the sequence into a contemplative meditation of the mystery of the day as the congregation remains seated during its proclamation.

Victimae Paschali Laudes is attributed to the Wipo of Burgundy, a chaplain to the Holy Roman Emperor Conrad II. It was composed sometime during the early eleventh century. It is sung on Easter Sunday and throughout the octave of Easter. As Christianity is a faith full of paradoxes, the first few stanzas abound in them: Christ has destroyed death by dying; he has restored our life by rising; the Lamb has redeemed the sheep. The next stanza portrays a violent battle: “death and life fought bitterly”. Christ’s “fight” against his violent enemies was pacifism—being led like a lamb to the slaughter opening not its mouth (Isaiah 53:7). The last paradox presented is “The Lord of life who died, reigns glorified.” The author of life has somehow died, and through dying, now reigns in glory. 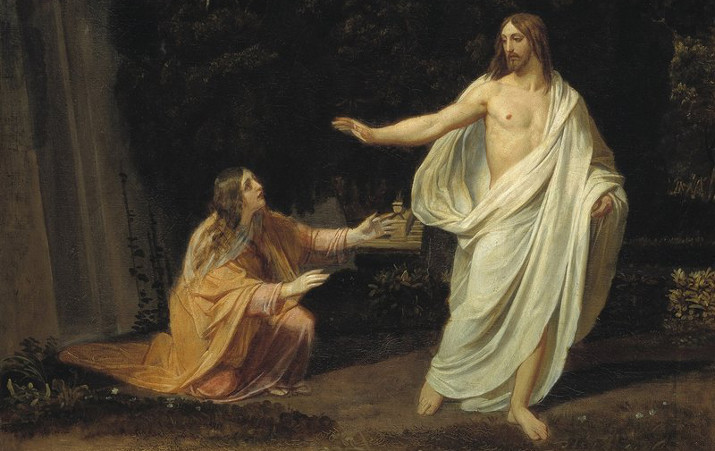 The next two stanzas are a dialog between the “narrator” and Mary Magdalene. The narrator asks Mary what she saw to prove Jesus’s resurrection. Mary’s response is a compilation of details from the gospels of Mark and John: she sees the empty tomb, the angels testified to his rising, Mary meets the Lord who instructs her to tell his disciples he will go before them to Galilee, and the shroud and linens left behind as seen by Peter and John.

The final stanza is an act of belief and faith in the resurrection due largely to Mary Magdalene’s testimony. We are brought full circle by the return of the paradox “His death is victory.” Likewise, we again refer to Christ as the Victor and King imploring his mercy. As Saint Augustine notes in his Confessions, Christ was “both Victor and Victim, and Victor because Victim,” and he was “both Priest and Sacrifice, and Priest because Sacrifice.” As we only hear this hymn two Sundays out of the year, may we meditate on its beauty and enter into this joyous day of our Lord’s resurrection. “Amen. Alleluia!”