We, as St. Wendelin parishioners,
dedicate ourselves to make disciples of all
by loving God with all our hearts, our souls,
our minds, and loving our neighbors as ourselves.
Love God. Love others. Make disciples.

O blessed St. Wendelin, you left royalty and riches in order to live a more intense life of love for our Lord; and all the while you worked wonders with the herds and flocks you tended. Please help us likewise to love our Lord more intensely, and to be instruments in His hand for the wonders He wants to work in all those for whom we care, and all those whom we meet. All this we ask in Jesus Christ, Our Lord. Amen.

Who is Saint Wendelin? 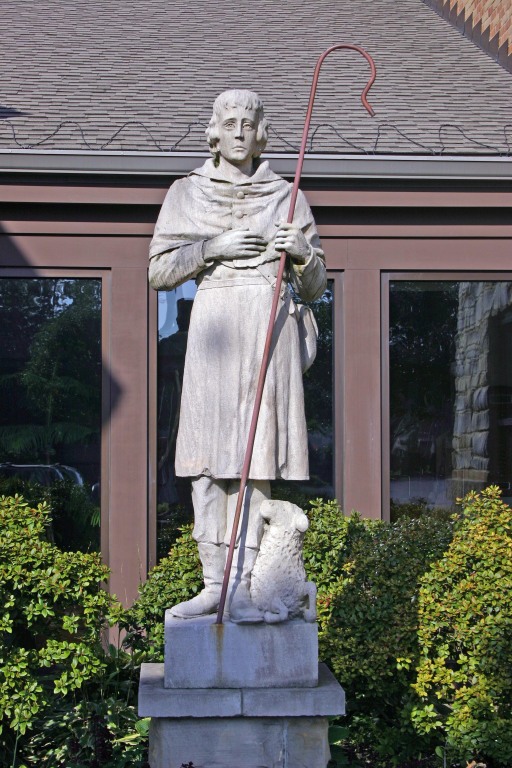 Wendelin is the patron saint of country people and herdsman and is still venerated in Germany, Austria, and Switzerland. He is most often represented in art as a youth, or as a bearded man with a shepherd's bag and a book in one hand and a shepherd's crook in the other. Sometimes lambs, cattle, and swine are also pictured with him along with a shield and crown that are usually placed at his feet. St. Wendelin is not mentioned in the Roman Martyrology, but his feast is observed in the Diocese of Trier on October 22. His earliest biographies did not appear until after 1417. Wendelin was the son of a Scottish king. After his youth, he secretly left his home on a pilgrimage to Rome. On his way back, he settled as a hermit in Westricht in the Diocese of Trier. When a great landowner scolded him for his secluded life, Wendelin entered this lord's service as a herdsman. Later, he felt the God’s call allowing him to return to his solitude. Then, Wendelin established a company of hermits from which sprang Benedictine Abbey of Tholey.
Acta SS., October, IX, 342-51; MOHR, Die Heiligen der Diozese Trier (Trier, 1892); LESKER, St. Wendelinus (Donauworth, 1898); ZURCHER, St. Wendelinus-Büch (Menzingen, 1903).

The first known Mass to be celebrated in what we now know as Fostoria occurred in 1844 in a log cabin on W. Tiffin Street near Main Street. Three short years later, Charles Foster, the namesake of Fostoria, donated land for a church to be built at the corner of North and Wood Streets. The first church broke ground in 1849 and was completed in 1851. St. Wendelin was chosen as the patron saint of the church because a portion of the members came from Wendel, Germany. The St. Wendelin community continued to expand with a rectory built in 1869 and a school was added nearby shortly after. The first class was held in 1873 with approximately 90 students.

As the church congregation continued to grow, a cornerstone for a new, larger church was laid at the corner of North and Wood Streets in 1879. The church was completed and dedicated in 1882. St. Wendelin added parishioners including students as the Fostoria community continued to grow with a desire for a strong, Catholic education. Therefore, construction on a new school building began in 1886. A year later, the Sisters of Notre Dame began their service here at St. Wendelin. Their ministry was continuous through June 2019 with deeply devoted Sisters serving as teachers, principals, pastoral associates and in many other ways over the years.

A new facade of the church was erected in 1902 with the construction of the current rectory in 1905. It was not long after that a new school was needed to house even more students in 1909. It was then, in 1910, St. Wendelin had its first high school graduate. However, it wasn't until 1924 that St. Wendelin fielded its first football team. This building stood until December 2018.

In 1926, it became more apparent that the school needed more room for a secondary school and land on North Countyline Street was purchased. The high school cornerstone was laid on September 28, 1930 by Bishop Stritch and reads "Teach me goodness, discipline, and learning." Later, these would become three of the four pillars of the St. Wendelin Catholic School Mission Statement; the fourth being faith. The school was dedicated May 18, 1931, by Bishop Stritch. Eighteen rooms were added to the high school building 1961,

completing the building in use until June 2019. Finally, construction on the current church building began in 1992 and was completed in 1993.

St. Wendelin and of Trier the Demographics of Fostoria
St. Wendelin was a Scottish/Irish figure who left his native land and led his life in the agriculture area of Germany. Fostoria was historically settled by Scottish, Irish and German immigrants with a sound base in the agrarian lifestyle. The makeup of Fostoria is still rooted in German culture with an emphasis on agribusiness. So, while evidence supports the naming of the church by the name of the place in which some of our immigrants came – it is fitting that the parish chose as its namesake Wendelin of Trier.