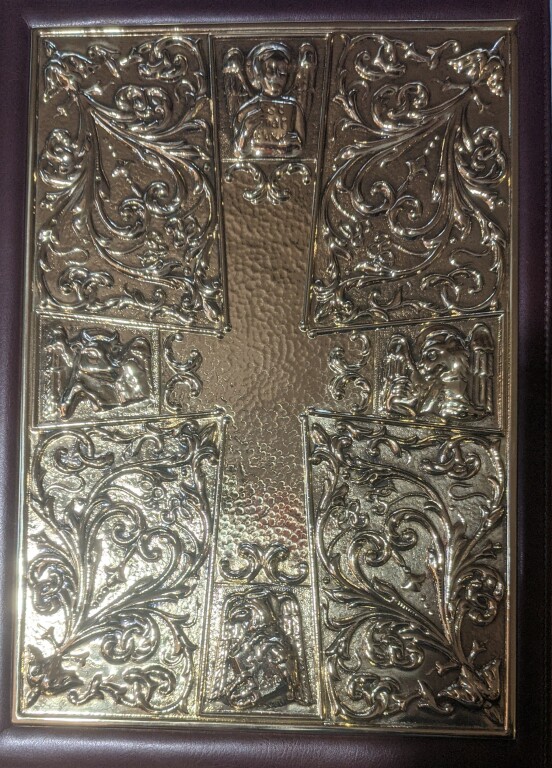 Beginning on Christmas, hopefully you noticed a difference with the Evangeliary (Book of the Gospels) as Dcns. Paul or Dave carried it in procession. A parishioner donated funds to purchase a beautiful leather and brass cover. The stamped gold foil on the cover of the Evangeliary has worn off and the parishioner offered to buy a new copy. With the rest of the book in good condition, Fr. P and I suggested purchasing a cover instead. Make sure to stop by the Gospel book stand in the gathering space and look at it in person! Amidst Baroque filigree, the cover features the four symbols of the evangelists. Did you know about the symbols of the Gospel writers? I never knew of them until Dcn. John Kromer mentioned Mark’s symbol in a homily about six or seven years ago. The four evangelists are noted by the following symbols:

In addition to the cover of the Evangeliary, you can see these symbols on the stained glass windows in the church by each of the Gospel writers.

Where do these symbols come from and what do they mean? The Biblical references to these four creatures comes from Ezekiel 1:1-21 and also Revelation 4:6-8. Saint Irenaeus (140-202), in his treatise Adversus Haereses (Against Heresies) applied one to each of the evangelists based on the content of his gospel and particular focus on Christ.

Matthew—Divine Man/Angel: Matthew begins with the lineage of Jesus all the way back to Abraham and then

moves to his Incarnation and birth. Irenaeus says, “This is the Gospel of His humanity; for which reason it is, too, that the character of a humble and meek man is kept up through the whole Gospel.”

Mark—Winged Lion: Lions are symbols of courage and royalty. Mark’s Gospel begins “The gospel of Jesus Christ, the Son of God” (1:1) and then quotes Isaiah: “A voice of one crying out in the desert…” (1:3). The voice is reminiscent of a lion’s roar and the prophet’s spirit “wings” down from heaven.

Luke—Winged Ox: The ox represents Jesus’s priesthood and sacrifice. Oxen were sacrificed as the Ark of the Covenant was brought into Jerusalem. They were also used in temple sacrifices. The gospel opens with the Gabriel announcing John the Baptist’s coming birth while was Zechariah offering sacrifice in the temple. Christ was born among oxen in the stable. Luke also includes the story of the prodigal son and slaughtering of the fattened calf to celebrate the son’s return and father’s mercy.

John—Rising Eagle: John begins with his lofty prologue on the Logos (Word) and continues to rise into the deep mysteries of God. He explains the relationship between the Father and Son and the Son’s incarnation. John’s Gospel is a case for Christ’s divinity. Some of Jesus’s most profound teachings are found in John’s Gospel: the discourse with Nicodemus, the encounter with Samaritan woman, the Bread of Life discourse, the raising of Lazarus, the Good Shepherd, and his high priestly prayer after the Last Supper. Jesus says he is “the way, the truth, and the life” (John 14:6) and all who believe and follow will rise like the eagle to everlasting life with him.