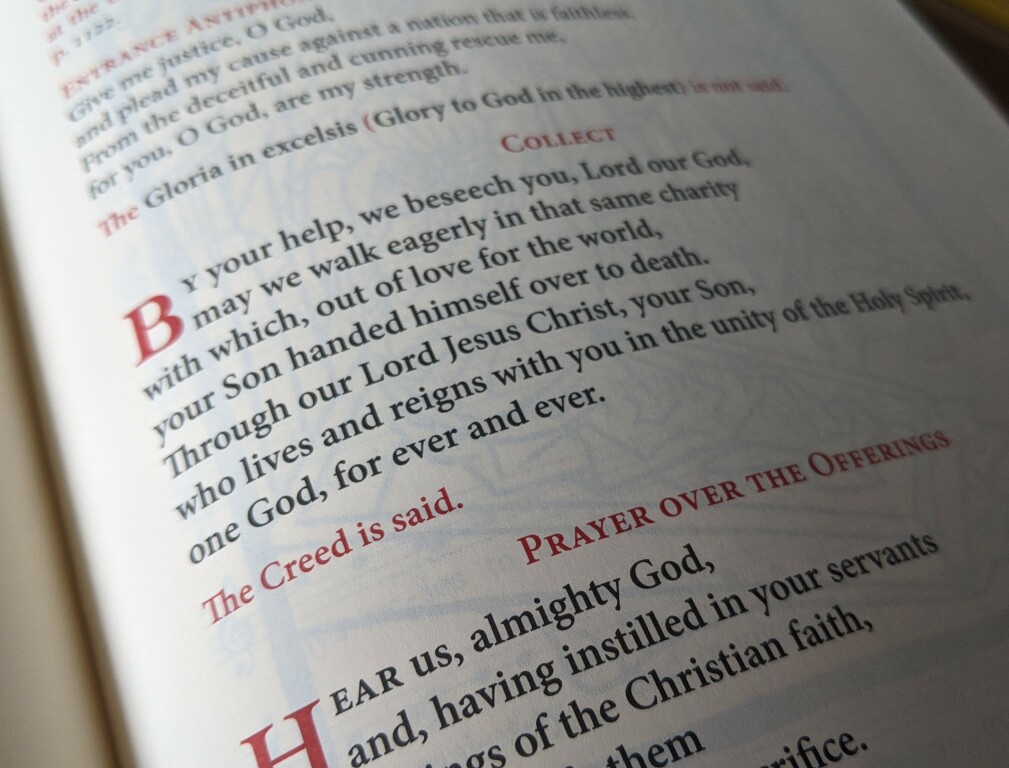 Last week, Fr. Poggemeyer explained the change to the end of the opening prayers with the removal of the word “one.” These prayers, called the Collect (with the emphasis on the first syllable [KAH-lekt]), are present in every liturgy celebrated by the Church. The word Collect comes from the Latin word “collectio” which means to accumulate or to gather together. The General Instruction of the Roman Missal says this about the Collect:

The Priest calls upon the people to pray and everybody, together with the Priest, observes a brief silence so that they may become aware of being in God’s presence and may call to mind their intentions. Then the Priest pronounces the prayer usually called the “Collect” and through which the character of the celebration finds expression (no. 54).

As the rubric notes, during the silence after the priest says “Let us pray,” we call to mind any needs or intentions we want to present to God. Then the Priest pronounces the Collect thus gathering together all our needs and offering them to God in the one prayer. We then make the prayer our own by our acclamation of “Amen” meaning “so be it.” It is important to note that the priest never says “Amen” at the end of the prayer. Why? In his role as presider, he is exercising a mediator’s role between the congregation and God: he cannot pray and respond on our behalf. We, as active participants in the liturgy, assent to what was spoken in the prayer.

Let us look at the formula of a Collect so we can better understand what is being said. There are generally five parts of a collect:

I. Address - naming of God or title for God
II. Acknowledgement or thanksgiving of God’s saving deeds
III. Petition - we ask for something specific (forgiveness, faith, etc.)
IV. Aspiration - if the petition is granted, what we hope will be the result
V. Conclusion - through the mercy of Jesus Christ, our mediator between humanity and divinity

This formula can be summed up thus: You (I) , Who (II), Do (III & IV), Through (V). Sometimes these parts can be interchanged or one is omitted. However, parts I, III, and V are always present.

As an example, here is the Collect for the Fifth Sunday of Lent:

(III) By your help, we beseech you, (I) Lord our God,
(IV) may we walk eagerly in that same charity
(II) with which, out of love for the world, your Son handed himself over to death.
(V) Through our Lord Jesus Christ, your Son,
who lives and reigns with you in the unity of the Holy Spirit, God for ever and ever.

I hope you appreciate this explanation and better understand the Collect so as to respond with a fervent “Amen” at the end!