A Cry from Deep Within: Singing in the Sacred Liturgy - Part II

Last week we barely scratched the surface on liturgical song and how music has been the foundation of Jewish and Christian worship for millennia. Music, as Saint Augustine says, is “a cry from deep within our being [and] a way for God to lead us to the realm of higher things.” Likewise, an ancient proverb usually attributed to Augustine says, “Whoever sings well prays twice over.” Because singing elevates our prayers and makes them more fervent, music transforms the common to the divine and transports us from earth to heaven.  Here is a wonderful quote from then-Cardinal Joseph Ratzinger (now-Pope Emeritus Benedict XVI) in his book The Spirit of the Liturgy:

The importance of music in biblical religion is shown very simply by the fact the verb “to sing” (with related words such as “song”, and so forth) is one of the most commonly used words in the Bible. It occurs 309 times in the Old Testament and thirty-six in the New. When man comes into contact with God, mere speech is not enough. Areas of his existence are awakened that spontaneously turn into song. (136, emphasis added)

How does this play out in biblical history? The first time music is mentioned in the Bible is when the Israelites

have crossed the Red Sea. Seeing the Egyptians lying dead on the seashore, Israel knows that once and for all they have been delivered from slavery and are now a free people. With that great joy at having experienced God’s saving power, they break into song with the great canticle of Exodus 15. We Christians, too, sing this canticle year after year at the Easter Vigil—not just as a reminder of what God did for Israel, but we sing it in a new way because of what God has done for us. As we read in Romans 6:3-9, each baptized soul has passed through the waters of death and brought to new life in Jesus. Ratzinger further writes:

[Jesus] has stridden through the Red Sea of death itself, descended into the world of shadows, and smashed open the prison door. … The definitively new song has been intoned, but still all the sufferings of history must be endured, all pain gathered in and brought into the sacrifice of praise, in order to be transformed there into a song of praise. (137-138)

Christ’s Resurrection is our exodus and the reason for our song! The song of victory over sin and death—the “new” Exodus 15 canticle—is the primordial song of the Liturgy. This canticle is the song of the Lamb and is 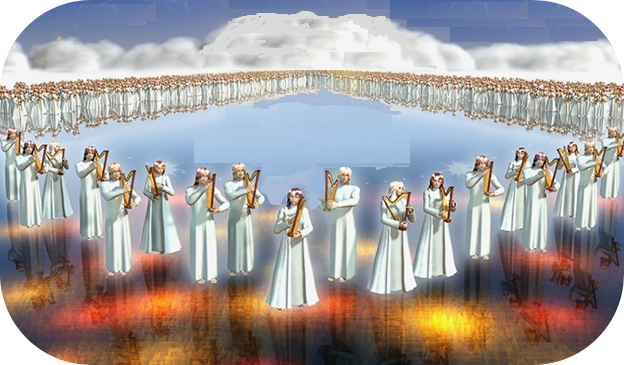 eternally being sung by all the saints in heaven, the members of the Church Triumphant. Revelation 15:2-3 says: “On the sea of glass were standing those who had won the victory … They were holding God’s harps, and they sang the song of Moses, the servant of God, and the song of the Lamb.” When we attend any Liturgy, but especially the Holy Sacrifice of the Mass, heaven and earth unite in a mystical manner. When that happens, our voices become one with the saints and angels in heaven who are praising God in song without ceasing. This transcendence of time and space lifts us into contact with God himself and as Ratzinger observes, when we come into contact with God, mere speech is not enough. These “mountaintop moments” are the basis for liturgical song. Can there be any question remaining of why the Church has always placed such a high importance on sacred music and its role in the liturgy? If we were to look back through the ages at Church documents, the majority of them pertaining to the Liturgy will be about sacred music or at least mention it.

The song of the infant Church was founded in the Book of Psalms which Christ himself would have sung in the synagogue. These sung prayers, many attributed to the great musician King David, come from very personal experiences. In these poems, we see the entire range of human emotion: joy, trust, lamentation, affliction, accusation, fear, praise, gratitude, and the list goes on. While many psalms come from personal experiences, they “always flow into the common prayer of Israel. They are nourished out of the common store of God’s saving deeds in the past.” (The Spirit of the Liturgy, 139) Thus, like Israel, when we sing in the liturgy, our personal experiences and emotions overflow into a communal song of praise through the true David, our Lord Jesus Christ. Through him, the Church sings ever anew the song of the Lamb. More next week!