Anthony grew up in Fairfield, Ohio which is in the Archdiocese of Cincinnati. Throughout his childhood and high school years, he was very active in church music. He began serving as a cantor in the third grade and he began serving as a substitute organist in junior high. Anthony graduated from Bowling Green State University where he earned a Bachelor of Music Education degree. With his background in church music and a desire to teach, being hired at Saint Wendelin in 2011 was the perfect fit. At the parish school, he taught the junior high and high school choirs, elementary band, and served as drama director. He also was privileged to serve as the "Voice of the Mohawks" as the PA announcer for football and basketball. In 2016, Anthony graduated from Saint Joseph's College (Renssealer, Indiana) with a Master of Arts in Music degree with a specialization in Church Music & Liturgy.

Anthony regularly composes music for the church, with many of the pieces being used at Saint Wendelin. In December of 2015, he was honored to have his orchestral setting of "Ave Verum Corpus" world-premiered by the Toledo Symphony Orchestra and Saint Wendelin Parish and School Choirs. One of the pieces composed for his Master's recital, "God, Who at the Font Once Named Us", was accepted for publication by World Library Publications in 2019. He also performed a voice recital in the inaugural season of the Karcher Concert Series.

In his spare time, he loves hiking in the woods, swimming, scuba diving, cooking, and baking. Anthony lives just north of Fostoria with his wife, Katherine; three daughters, Elizabeth, Evelyn, and Eliana; and dog, Hawkeye. 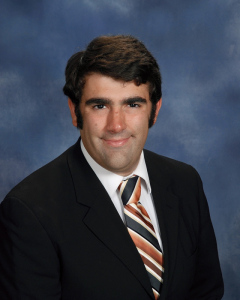