As we hear of many times in the Scriptures, important events are announced by way of a proclamation. The Church, whether in or outside the liturgy, also has many instances of ritual proclamations. Two formal proclamations fall during the Christmas season. The first is on Christmas night, where prior to the beginning of Midnight Mass where The Christmas Proclamation may be chanted. What is it and where does it come from? 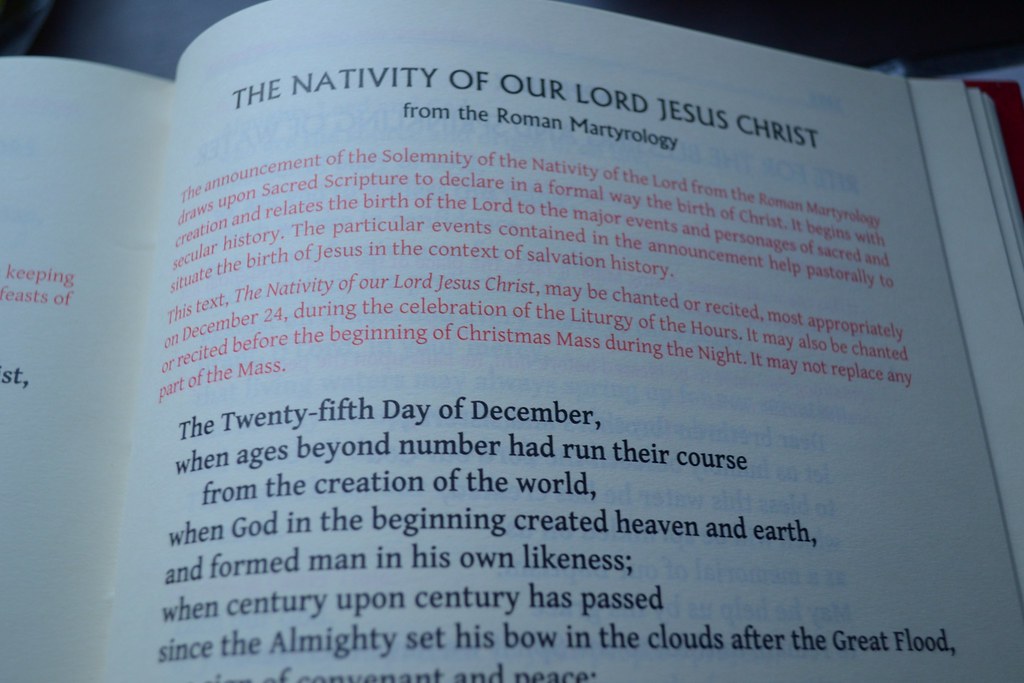 exhaustive) list of saints of the Catholic Church.  It was first promulgated in 1583 by Pope Gregory XIII and was most recently updated under Saint John Paul II in 2004.

The rubrics for the proclamation state: “The announcement of the Solemnity of the Nativity of the Lord from the Roman Martyrology draws upon Sacred Scripture to declare in a formal way the birth of Christ. It begins with creation and relates the birth of the Lord to the major events and personages of sacred and secular history. The particular events contained in the announcement help pastorally to situate the birth of Jesus in the context of salvation history.” There are nine different events the text states as it moves from general to more specific dates.

According to Church and secular historians, the last four dates are highly accurate. They all place Christ’s birth around 3 to 2 B.C, give or take a couple months. Here is the text of that proclamation which will be sung prior to Midnight Mass.

The Twenty-fifth Day of December,
when ages beyond number had run their course from the creation of the world, when God in the beginning created heaven and earth, and formed man in his own likeness;
when century upon century had passed since the Almighty set his bow in the clouds after the Great Flood, as a sign of covenant and peace;
in the twenty-first century since Abraham, our father in faith, came out of Ur of the Chaldees;
in the thirteenth century since the People of Israel were led by Moses in the Exodus from Egypt;
around the thousandth year since David was anointed King;
in the sixty-fifth week of the prophecy of Daniel;
in the one hundred and ninety-fourth Olympiad;
in the year seven hundred and fifty-two since the foundation of the City of Rome;
in the forty-second year of the reign of Caesar Octavian Augustus, the whole world being at peace,

JESUS CHRIST, eternal God and Son of the eternal Father, desiring to consecrate the world by his most loving presence, was conceived by the Holy Spirit,
and when nine months had passed since his conception, was born of the Virgin Mary in Bethlehem of Judah,
and was made man:
The Nativity of Our Lord Jesus Christ according to the flesh.