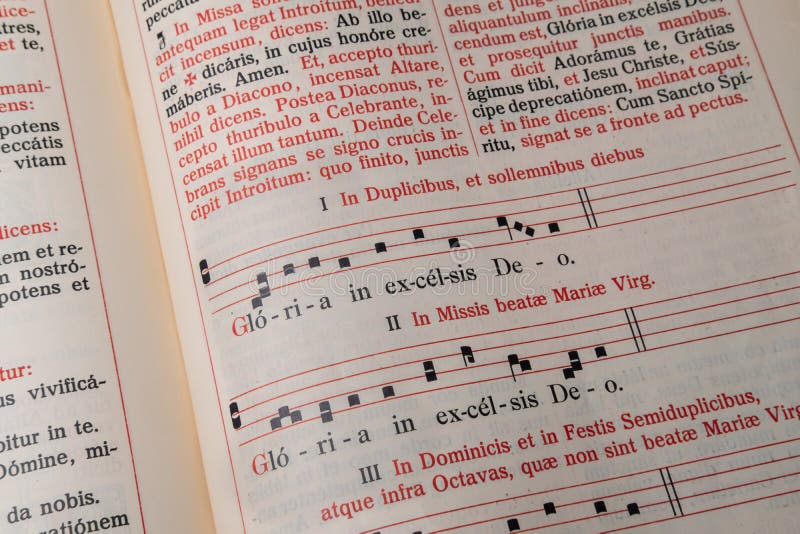 Although not received recently, one question I have been asked in the past is, “Why do we change the Mass Setting every couple of months?” To answer this, let me first explain what the Mass Setting is. In the Mass, there are essentially two sets of prayers: one set when present always remains the same and one set changes based upon what Mass is celebrated. The fixed set is called the Ordinary and the changing set is called the Proper. The parts of the Ordinary are the Kyrie (Lord, have mercy), Gloria, Credo (Creed), Sanctus (Holy, Holy, Holy), and the Agnus Dei (Lamb of God). Why I noted “when present” above is because that the Gloria is omitted in Advent, Lent, and Masses with a rank of memorial or lower. Additionally, the Creed is only sung or said on Sundays and solemnities. Thus some of the Ordinary may not be used depending on the celebration.

A “setting” of these prayers in the Ordinary refers to the music composed for them and it is given a title, usually in honor of Christ, Mary, a saint, or a blessed. It is important to note that the text of these prayers in its entirety must be present even though the music to which it is set can change. Composers are free to repeat certain words or phrases in their settings if it makes sense musically, but cannot alter or omit any of the text. So, if the text never truly changes, why don’t we just use the same setting of music for the entire year? What is the purpose of changing settings? These are good questions!

There is no hard and fast rule or rubric from the Church on what setting to use or when to change—it is left up to each parish and the music director. Many music directors change settings seasonally to heighten the aura of the new season. For instance the last couple years, we have used Missa Emmanuel for Advent—a very simple setting with minimal voicing and instrumentation. Using the tune veni emmanuel (“O Come, O Come, Emmanuel”), it gives all the Masses in Advent a sense of longing and yearning for the coming of Christ at Christmas. To contrast that, once we get to Christmas I use a setting which has more harmonies, instrumentation, and a quicker tempo to convey the joy of Christ’s birth. Similarly, for Lent I schedule a very subdued setting and then contrast it with a very full or more ornate setting at Easter.

With all of that explained, you may be wondering why we changed settings in the middle of this long stretch of Ordinary Time. We had been using Mass of Christ, Light of the Nations since early June. You probably noticed that we switched settings last month to the Mass of St. Frances Cabrini. Why the change—after all, it’s still the same season, right? I would answer, “Yes and no”: “yes” that it is still Ordinary Time, but “no” because of the fact that the focus of the season has changed. From June through the first week of September, the Gospel passages we heard from Mark and John focused on Jesus’s teachings and the miracles he performed. These passages slowly revealed to us who Jesus is. This gradual reveal comes to a climax on the Twenty-fourth Sunday in Ordinary Time, which was September 12. Jesus asked the Apostles, “Who do people say that I am?“ and we heard the responses: “John the Baptist, Elijah, one of the prophets.” He then asks, “But who do you say that I am?” and we had Peter’s spot-on response: “You are the Christ.” Immediately after Peter’s proclamation, Jesus predicts his impending Passion, Death, and Resurrection for the first time. He then tells his disciples that anybody who wishes to come after him must “deny himself, take up his cross, and follow me” (Mark 8:34). By this first of three predictions of his looming Passion, Jesus turns his eyes toward Jerusalem and the rest of the liturgical year begins quickly moving toward Calvary. And with Jesus’s change in focus, we too change with him since he said we must pick up our cross and follow him. As the Proper changes each week with the antiphons, prayers, and hymns, the most profound way to effect an overall change in focus is by switching the setting of the Ordinary. We will continue to use the Mass of St. Frances Cabrini through the Solemnity of Christ the King which ends the dominical cycle of the liturgical year.

I hope this article helps explain why we change Mass settings throughout the year. As I regularly joke with our parish musicians, “There is a method to my madness, or a madness to my method.” I’ll leave it to you to decide which it is!

A blessed week to all of you!