Hallowe'en, Allhallowtide, and the Month of the Dead

Hallowe’en, Allhallowtide,
and the Month of the Dead

Did you know that Halloween is actually a Christian holiday? Yes - you read that right. It can be hard to fathom

considering the way our culture has secularized Halloween. There’s the huge focus on candy, costumes, and decorations, which are inherently fun and good things in moderation. As a parent of young children, I love decorating the house, carving pumpkins, and taking them trick-or-treating. Again, good and fun things! Then there's the sinister side of Halloween and its obsession with horror themes, the occult, and the demonic which should be absolutely avoided. So how is Halloween a Christian holiday? Just by looking at the name itself, we can see how Halloween is Christian: hallow = holy/saint; and, e’en = a contraction for the word eve. Halloween or All Hallows’ Eve is the beginning of a short liturgical season called Allhallowtide or Hallowmas. This season begins the month of November where the Church particularly remembers the dead. Allhallowtide is a kind of triduum: three days of commemoration of the dead that includes All Hallows’ Eve (October 31), All Saints Day (All Hallows’ Day, November 1), and All Souls’ Day (November 2). What are the origins of these three days? 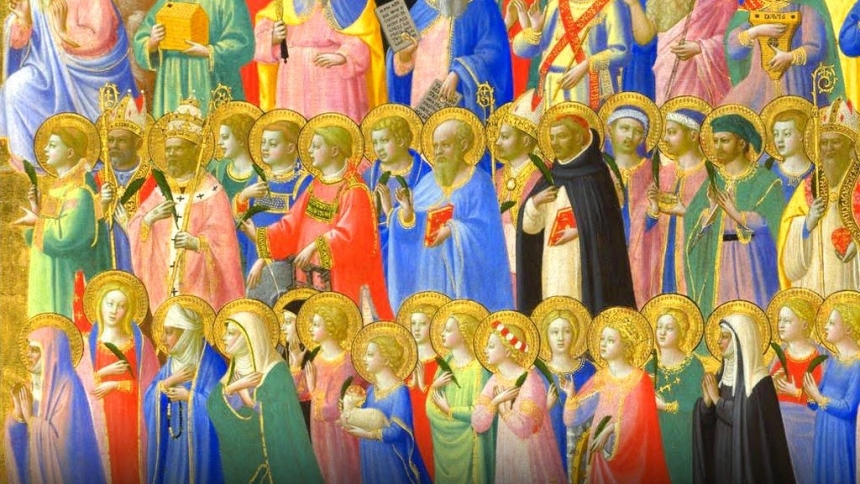 and saints to celebrate than there were days of the year! All Saints became the “catch-all” for those not in the calendar and for those whose names were unknown. In 609, Pope Boniface IV officially established the feast of All Saints on May 12 or 13 in Rome. Pope Gregory III moved it to November 1 in the eighth century; and one century later, Gregory IV placed it on the universal calendar. Like all high feasts in the Church, the day prior (Hallowe’en) became a day of prayer and fasting. A vigil Mass was held in the evening on October 31, candles and incense were burned before images of the saints in churches, and people prayed and reflected on the example of the saints’ lives.

All Souls’ has its origins from Saint Odilo, an abbot of the Benedictine Abbey in Cluny, France. Building on the

venerable tradition of praying for the dead, in 998 he established a day of Masses, fasting, and almsgiving offered for the souls in purgatory. This tradition quickly spread to other monastic communities and dioceses. By the 14th century, All Souls’ was observed by the entire Church, thus completing the triduum of Allhallowtide. These three days were so important to the faithful that in the mid-1500s Pope Sixtus IV expanded the celebration of Allhallowtide to an octave ending on November 8. Each day of the octave the faithful could obtain a plenary indulgence for a soul in purgatory. The octave remained until 1955 at which point the octave, All Hallows’ Eve, and many other vigil Masses were removed from the calendar.

Many traditions emerged from these days—one was the ringing of bells. Church bells rang very joyously on October 31 and November 1. Then they would toll mournfully on November 2. You might know that our tower bell rings at 9:00 PM every night to mark the praying of the De Profundis (Psalm 130) or the Reqiuem aeternam (Eternal rest) for the dead.

Another tradition from England was the baking and giving of soul-cakes on November 2 (called “Souling Day”). A soul-cake was a small round cake with a cross scored into it. Children and the poor would go from house to house of the wealthier class asking for money, apples, ale, or the little cakes. Naturally, some houses would not participate, but many would offer the callers—who often chanted a rhyme—a small treat. Sound familiar?

Although All Hallows’ Eve and the octave with its respective Masses are no longer in the calendar, the ability to gain a plenary indulgence for a soul in purgatory each day from November 1-8 remains. One must meet the usual conditions of confession (about 20 days before or after), complete detachment from sin, reception of Holy Communion, and praying for the intention of the Holy Father. The indulgenced act is visiting any cemetery and offering prayers for the dead.

As we celebrate the secular parts Hallowe’en this evening, may we have a fun time with the candy, decorations, trick-or-treating, and dressing in costumes; but may we always remember and act on this day’s original purpose: to celebrate and honor all the saints (Church Triumphant) and pray, fast, and give alms for the dead (Church Suffering).