Welcome to the schedule for the 2022-23 season of the Karcher Concerts Series! An exciting year of music lies ahead as we welcome many different performers to the beautifully acoustic space of Saint Wendelin Catholic Church. Information on each of the concerts or recitals can be found below. As concerts get closer, more details will be added, especially as to some of the repertoire to be performed. 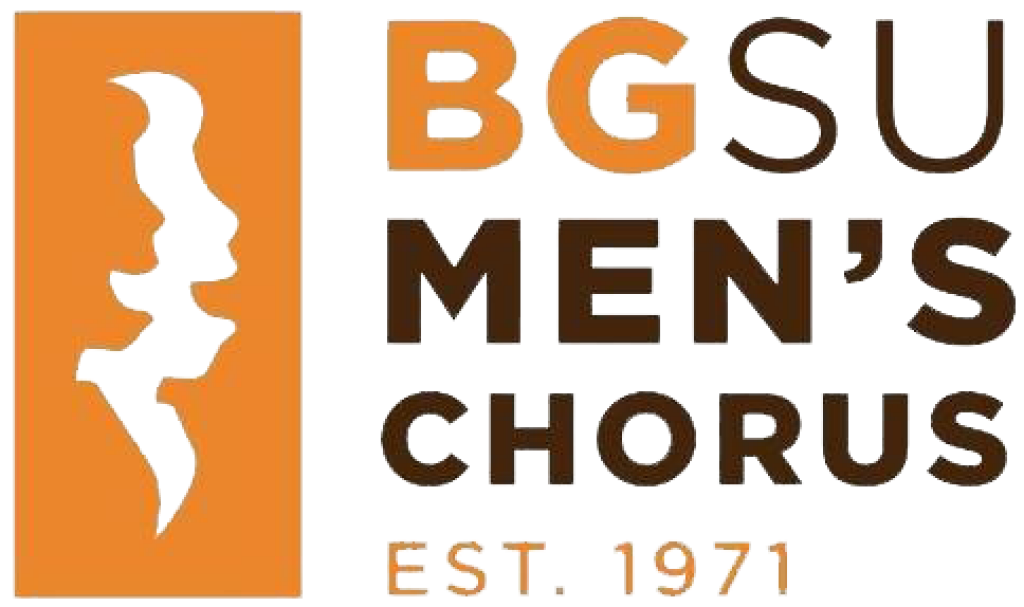 Widely reputed as “America’s Finest Singing Machine,” the Bowling Green State University Men’s Chorus is an auditioned large ensemble open to all tenor and bass singers on campus. The ensemble encompasses students from across all majors, representing all seven colleges at the University with over half of the members being non-music majors. The chorus functions both as a student organization and as a course offered through the College of Musical Arts, therefore deriving an atmosphere of brotherly camaraderie and exemplary musicianship. This year’s fall tour program includes a variety of repertoire, with classic selections by Franz Schubert and Pablo Casals, new compositions by Jocelyn Hagen and Joan Szymko, music by John Legend and Common from the motion picture, “Selma”, traditional songs of the BGSU Men’s Chorus, and more. 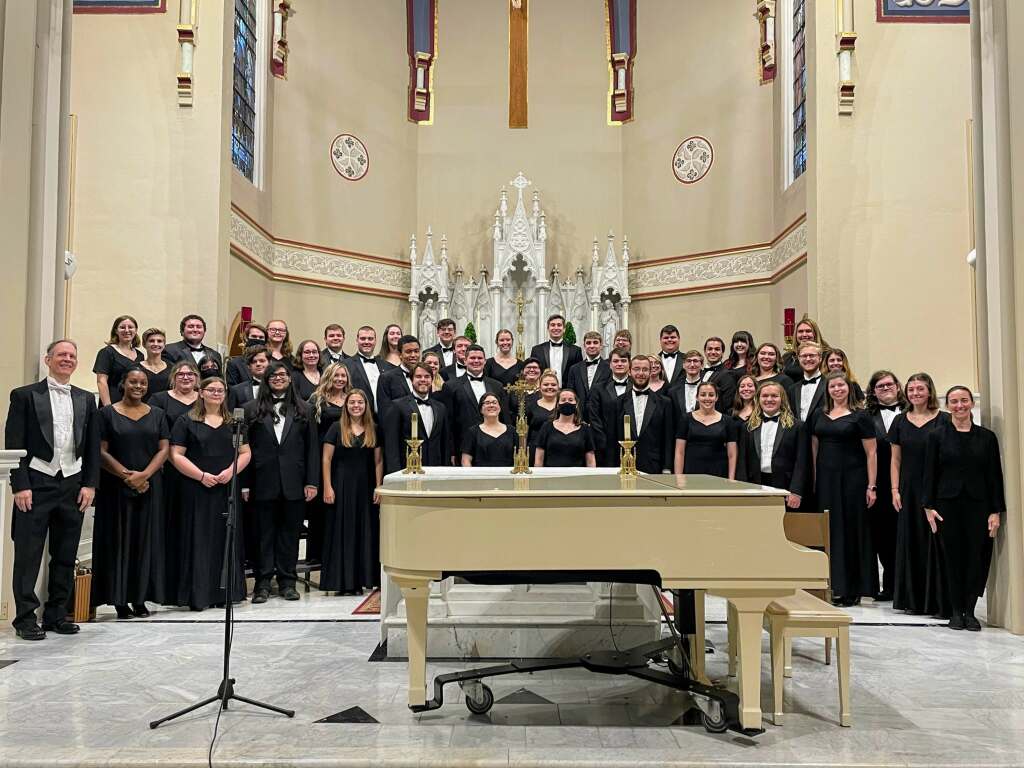 Our second concert will feature the Heidelberg University Concert Choir and Chamber Singers on Sunday, November 13 at 3:00 PM. Aiden Steinmetz, one of our cantors, is a member of the Concert Choir!

The Concert Choir is the premiere mixed choral ensemble of Heidelberg University’s School of Music. Annually, the choir masters an eclectic repertoire of choral literature representing major choral genres, historical eras, and cultural traditions. Highlights of the year include the choir’s collaboration with the University-Community Chorus and Orchestra each December in performances of Handel’s Messiah and other traditional holiday favorites and the annual spring tour. The choir is open by audition to all Heidelberg University students, regardless of major. The Chamber Singers is a small ensemble consisting of singers selected from The Concert Choir that specializes in performances of music from the Renaissance, Baroque, Romantic, and contemporary eras. 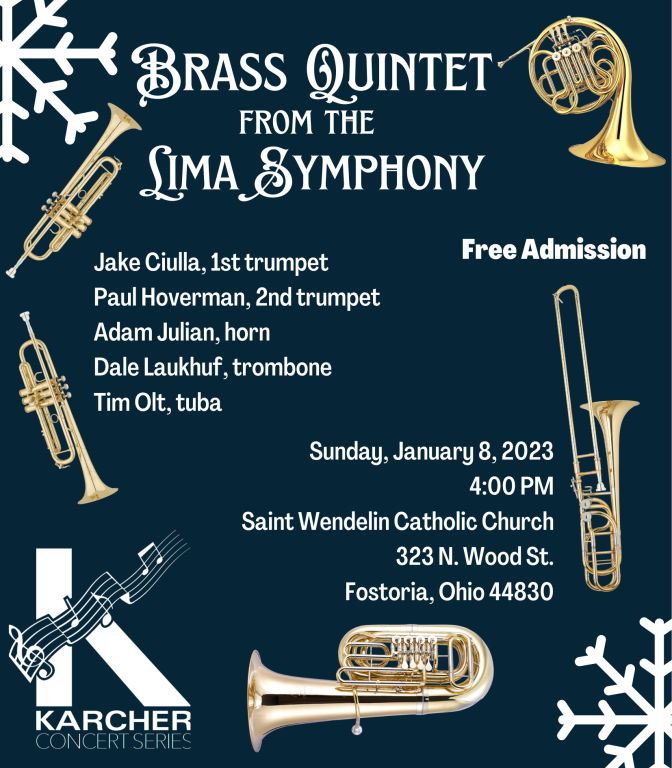 Christmas isn't complete without a brass quintet! Close out the Christmas season on the solemnity of Epiphany with brass players from the Lima Symphony Orchestra.

There may also be a piece or two combined with our magnificent Holtkamp pipe organ! 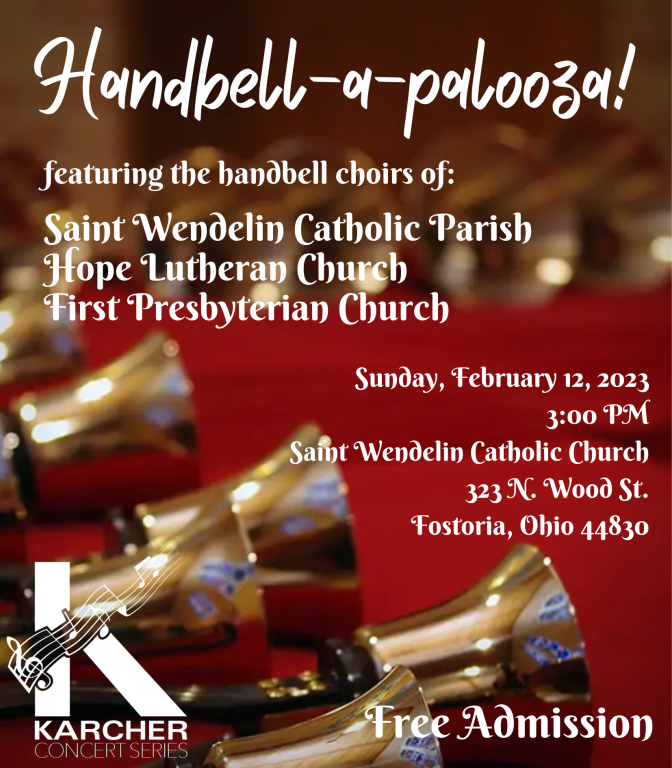 The handbell choirs of Saint Wendelin, Hope Lutheran, and First Presbyterian will come together to ring out songs of joy! Each bell choir will play a few pieces of their own and at the end, they create a "Handbell-a-palooza" with all three choirs combining together to close out the concert!

You won't want to miss this wonderful concert where we bring together multiple churches in our beloved Fostoria! 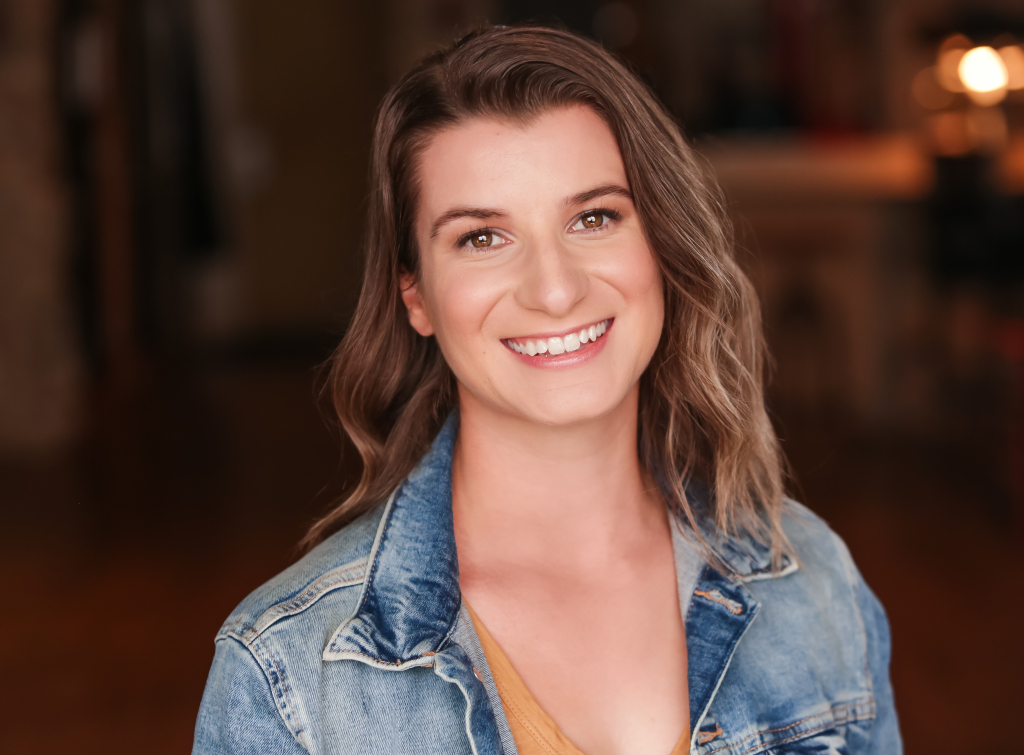 At our fifth concert, we welcome home a daughter of the parish, Erica Gabel! Erica graduated from Ohio Northern University in 2017 with a BA in Theatre and a minor in Arts Administration. Upon graduation, Erica spent the summer and fall performing with the Peanuts Gang at Cedar Point. In February of 2018, she accepted an internship at Writers Theatre in Glencoe, Illinois, which brought her to Chicago. She has remained there since then, taking classes at Acting Studio Chicago and working on short films and theatre productions. She is currently working on a production of the Greek tragedy, Antigone, with Playtime Theatre Company. Her dream is to work as a professional actor throughout Chicago and Los Angeles; but really, her biggest dream is to be cast in National Treasure 3!

Erica is a 2013 graduate of St. Wendelin Catholic School and a two-time recipient of the Karcher Music Scholarship. She will perform a concert of songs from popular musicals! You definitely want to come hear her sing and welcome her "home"! 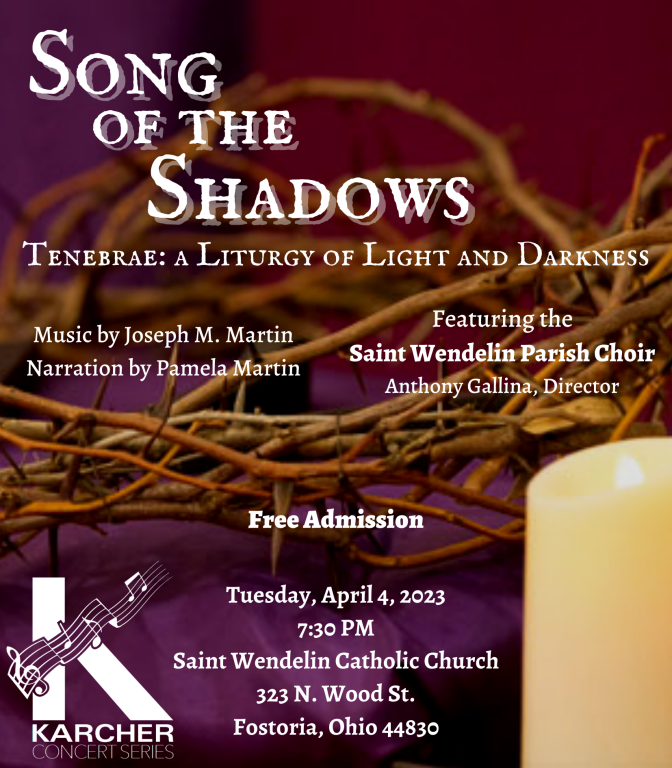 Our sixth concert will be our own Parish Choir's performance of Joseph M. Martin's "Song of the Shadows" on April 4 at 7:30 PM. This 35 minute work is a tenebrae liturgy. Tenebrae means "darkness" and is a traditional para-liturgy of Holy Week. It usually consists readings, songs, and candles. After each reading and song, a candle is extinguished. The final candle is the Paschal Candle and when extinguished, it signifies Christ's death on the cross.
Martin notes: "Past Pilate's court we see Jesus walk through the valley of the shadow of death as he embraces the cross. Yet it is the silhouette of that same cross which, cast onto the sands of time, offers rest and shelter for those who are weary from the journey. In that sacred shadow, we discover our faith. ... Wherever there are shadows, there is also light." 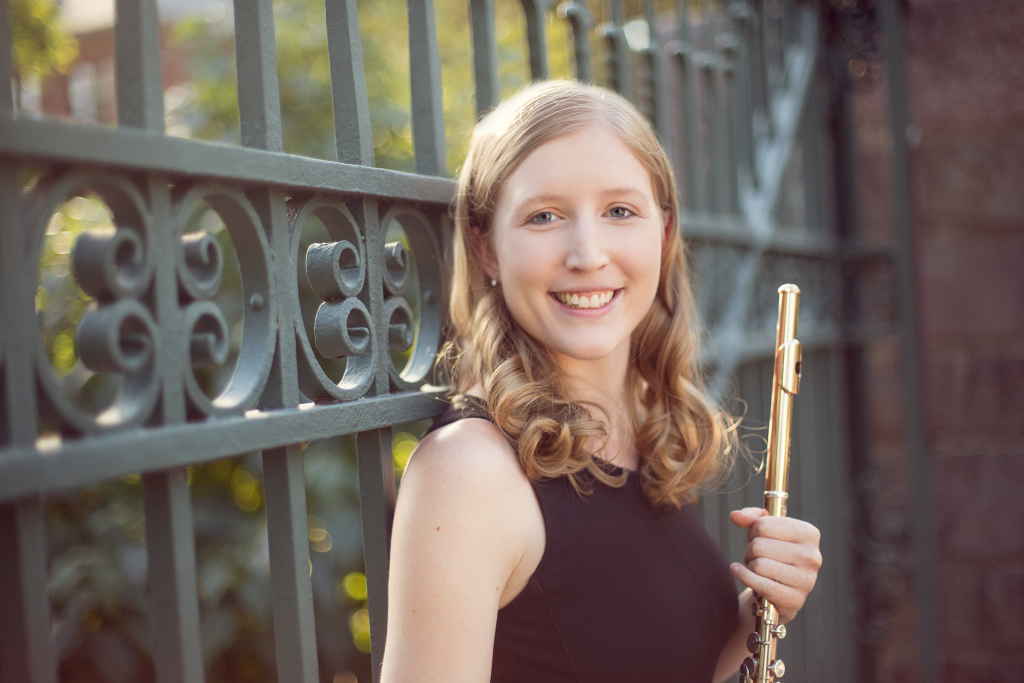 Our final concert of the 2022-23 season is a flute and piano duo: Angela Massey and Chee-Hang See.

As a soloist, has been a featured guest artist with the Tryon Concert Association, Kosciuszko Foundation in New York City, River Center for the Performing Arts, and the National Flute Association. Outside of the United States, she has performed in England, France, Germany, Italy, Romania, and Switzerland. She serves as Artistic Director and founder of the Astralis Chamber Ensemble arranging and performing numerous recitals each year. She received degrees in flute performance from Carnegie Mellon University, University of Cincinnati College-Conservatory of Music, and the University of North Carolina at Chapel Hill. 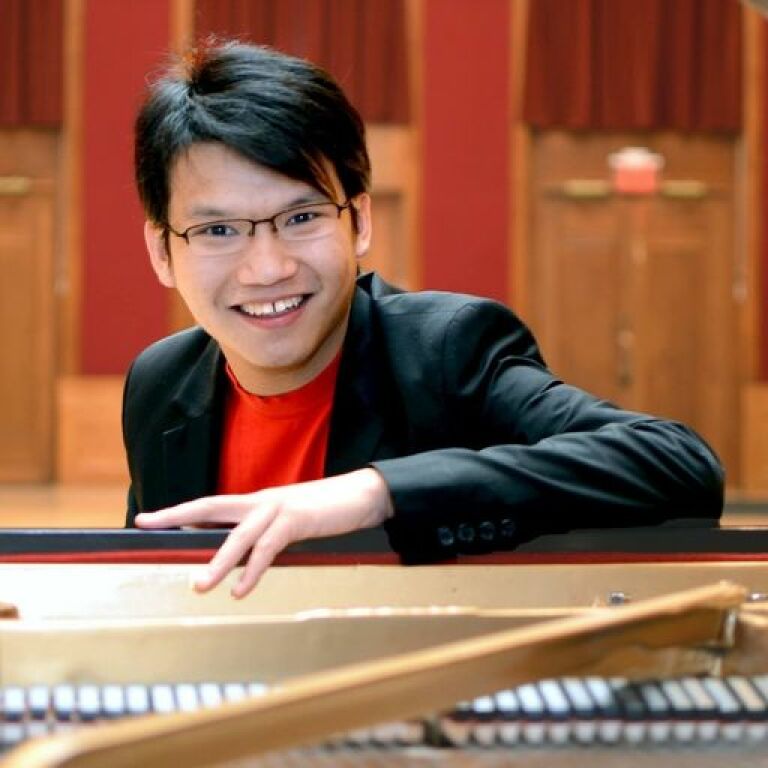